W
When attempting to explain to Americans the significance of Mustafa Kemal Atatürk and his legacy in Turkey, I often use the analogy that he is like every US founding father rolled into one. Likewise, Anıtkabir--the mausoleum that houses Atatürk’s coffin, and so much more--is a bit like the Lincoln, Jefferson and Washington monuments put together. This comparison is one I’ve always found helpful, in part because the two sets of monuments roughly share the same architectural flavor, despite Anıtkabir’s vast size.

Whether as a tourist, tour guide, or historian, I have always found Anıtkabir fascinating, because it is a tremendous example of nationalist myth-making. While the architecture itself can be charitably described as grandiose, it is really the museum, which features exhibitions of Atatürk’s possessions (including a rowing machine and cane-rifle), the war for independence (complete with life-sized diorama of the Sakarya Pitch battle) and era of reforms, that does much of the work of hagiography.

Recently, I have begun investigating how this museum and monument came about, which has resulted in an interesting thought experiment regarding what Anıtkabir could have looked like if the memorial's design committee (formed in the early 1940s) had decided to go in a different direction. Along the way I have also learned that, perhaps unsurprisingly, the competition was subject to the geopolitics of the early years of World War II, as many of the nearly fifty submissions were not only from Turkish architects but also from Germany and Italy. Many of the European submissions came from architects who had already been tapped to build many of the major buildings of the new Turkish capital throughout the 1930s.

The history of this competition has been preserved in the pages of the Turkish journal Arkitekt, which ran a series of articles in 1943 highlighting many of the entries, complete with scale renderings and plans. Below I’ve excerpted some of this journal’s comments on the various entries. The views of Arkitekt’s editors seem to have been independent from the evaluations of the competition committee (for an an in-depth analysis of the politics behind this committee, see Christopher Wilson’s recent monograph, Beyond Anıtkabir, cited below). On the whole, Arkitekt's commentators tended to prefer modernist-nationalist designs across the board, and often took issue with some designs that they felt to be over-orientalizing.

We have compiled here a gallery of nine of the more striking submissions to this competition, taken from the pages of Arkitekt, with short descriptions and reflections. Afterwards is a translation of some the most pertinent competition rules, as published in the magazine: 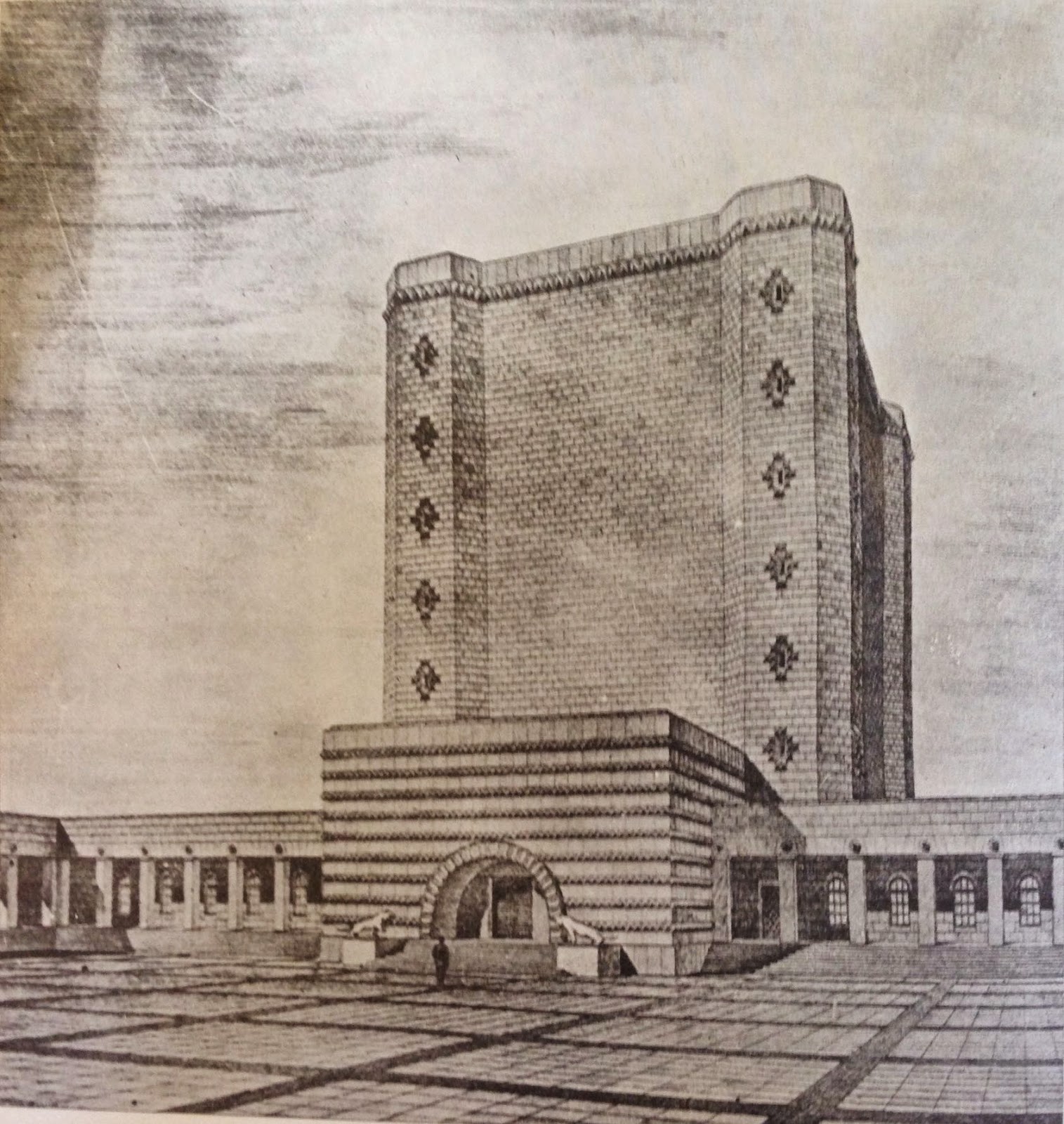 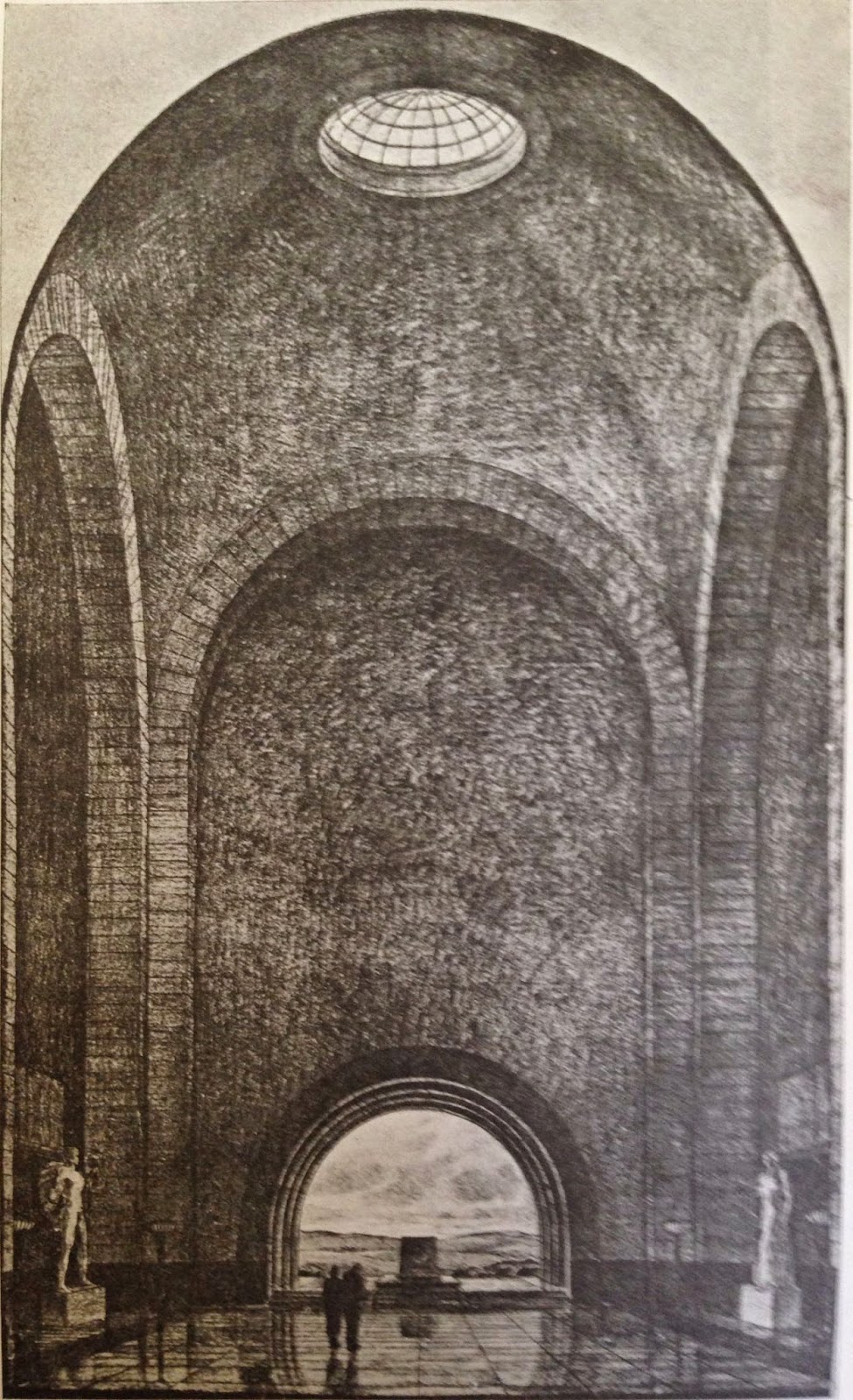 [1] This entry from German architect Yohannas Krüger features a tiling pattern on the façade that is reminiscent of Persian and Central Asian motifs. Krüger’s submission is markedly more understated than some of his Italian and German counterparts. From Arkitekt: “Architect Y. Krüger’s project is a strong piece of work. While the external architecture is a bit brutal in its effect; the interior is rich. In the architect’s project, the memorial dominates the concept and the hall in which the tomb is placed forms the basis of the mass; the other components such as the [architectural] details remain secondary.” 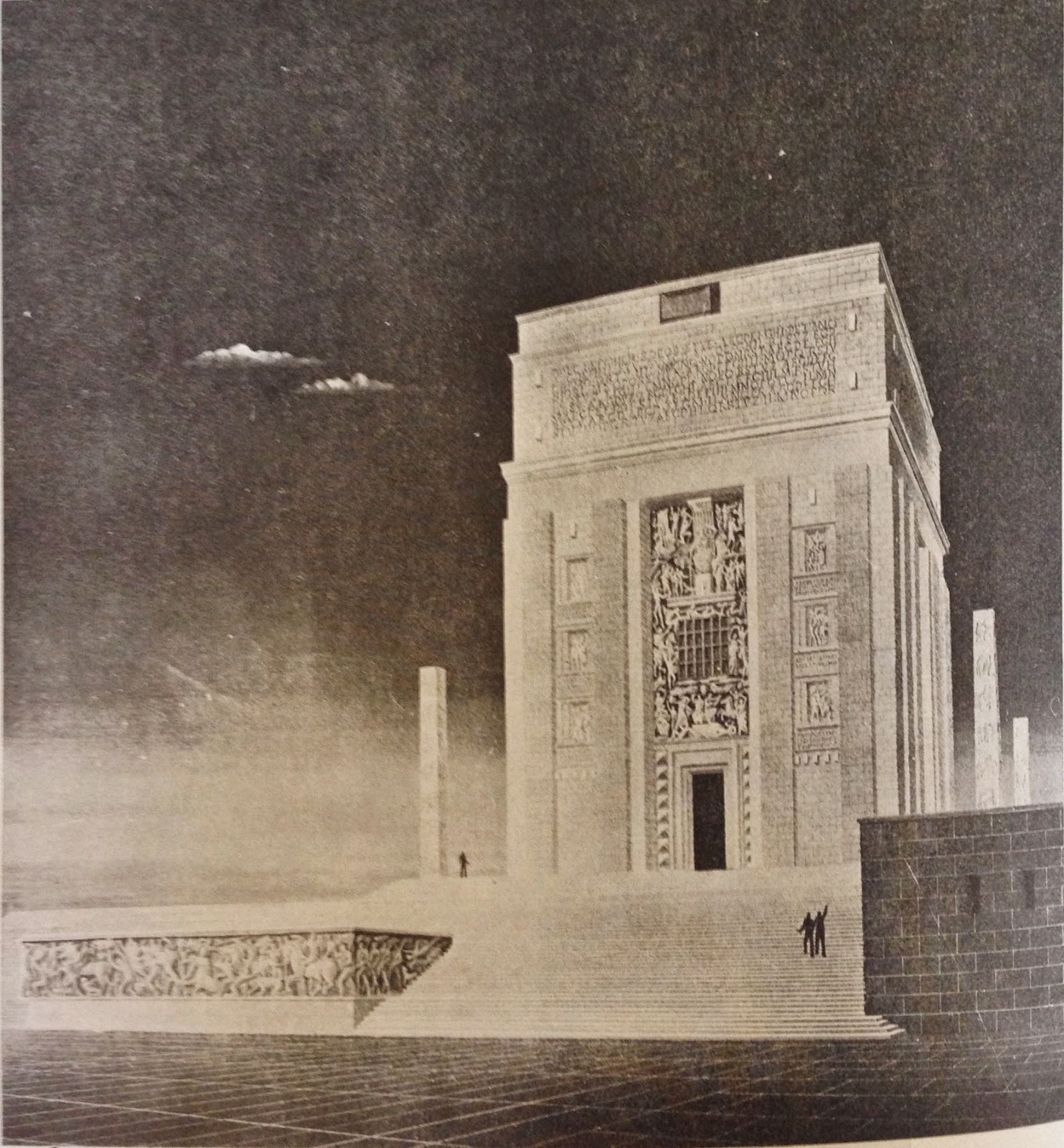 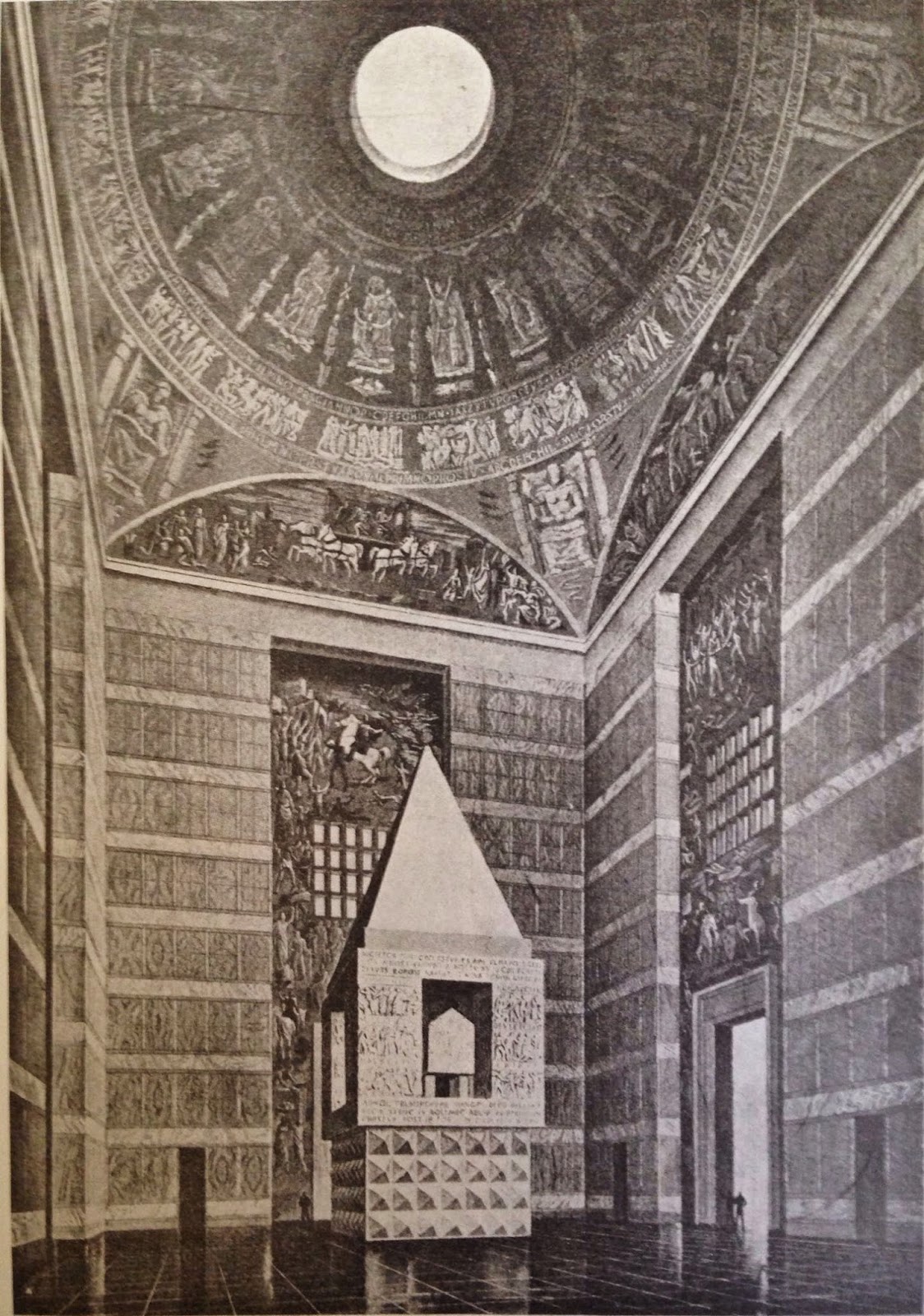 [2] The first Italian proposal featured in Arkitekt comes from Arnoldo Foschini, who won second prize in the competition. According to Wilson, the Italian Minister of Education praised the entry in a letter to Foschini writing, “Italian architecture, through your appreciated work, has obtained another solemn acknowledgement on foreign soil and in
competition with artists of other nations.” From Arkitekt: “The external design has a similarly relative volume; the façades are filled with superfluous bas-reliefs. Entering the interior space conjures the spirit of a church; the composition of the hall of honor constitutes a contrast between Turkish and Islamic spiritualism.” 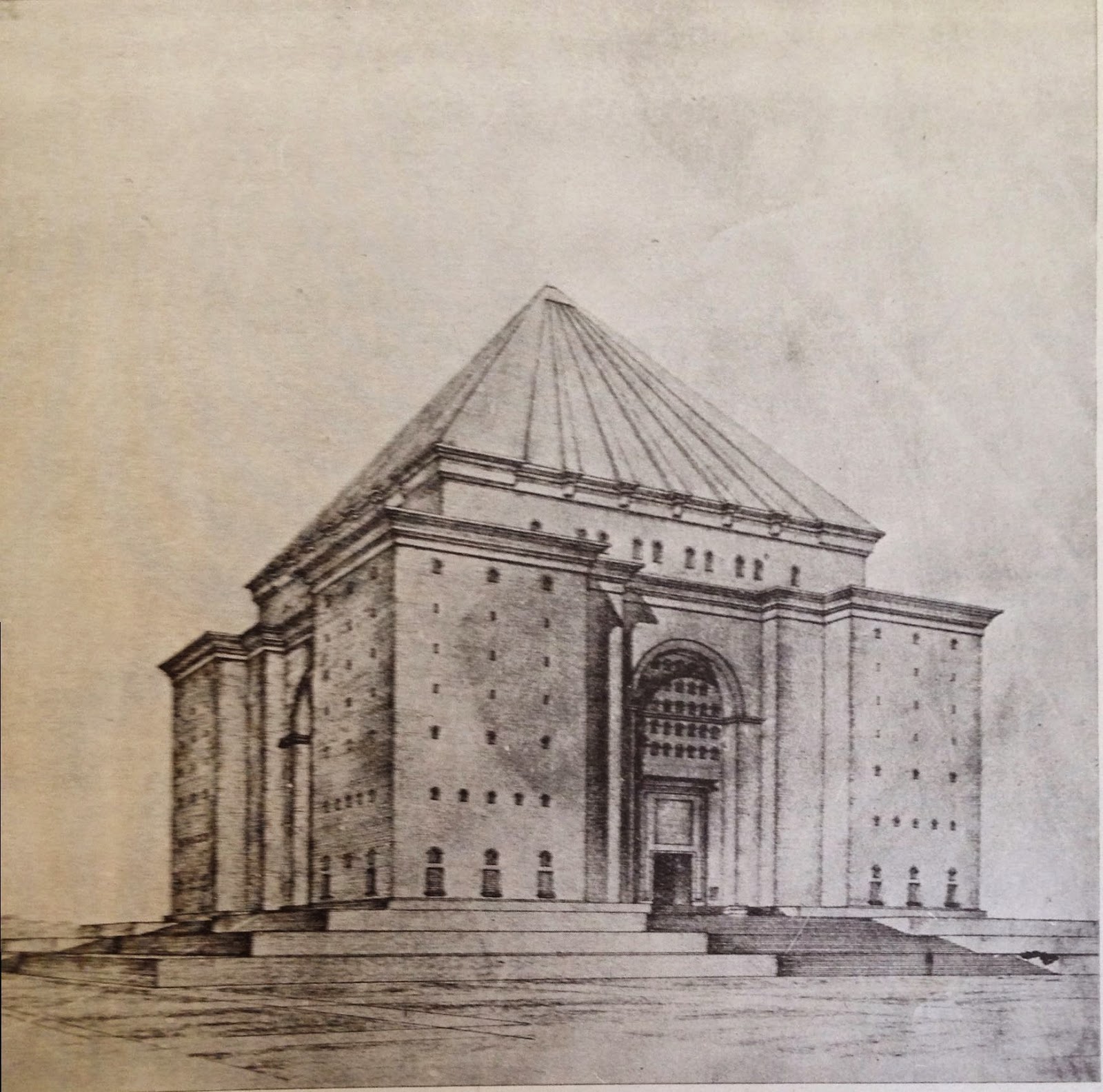 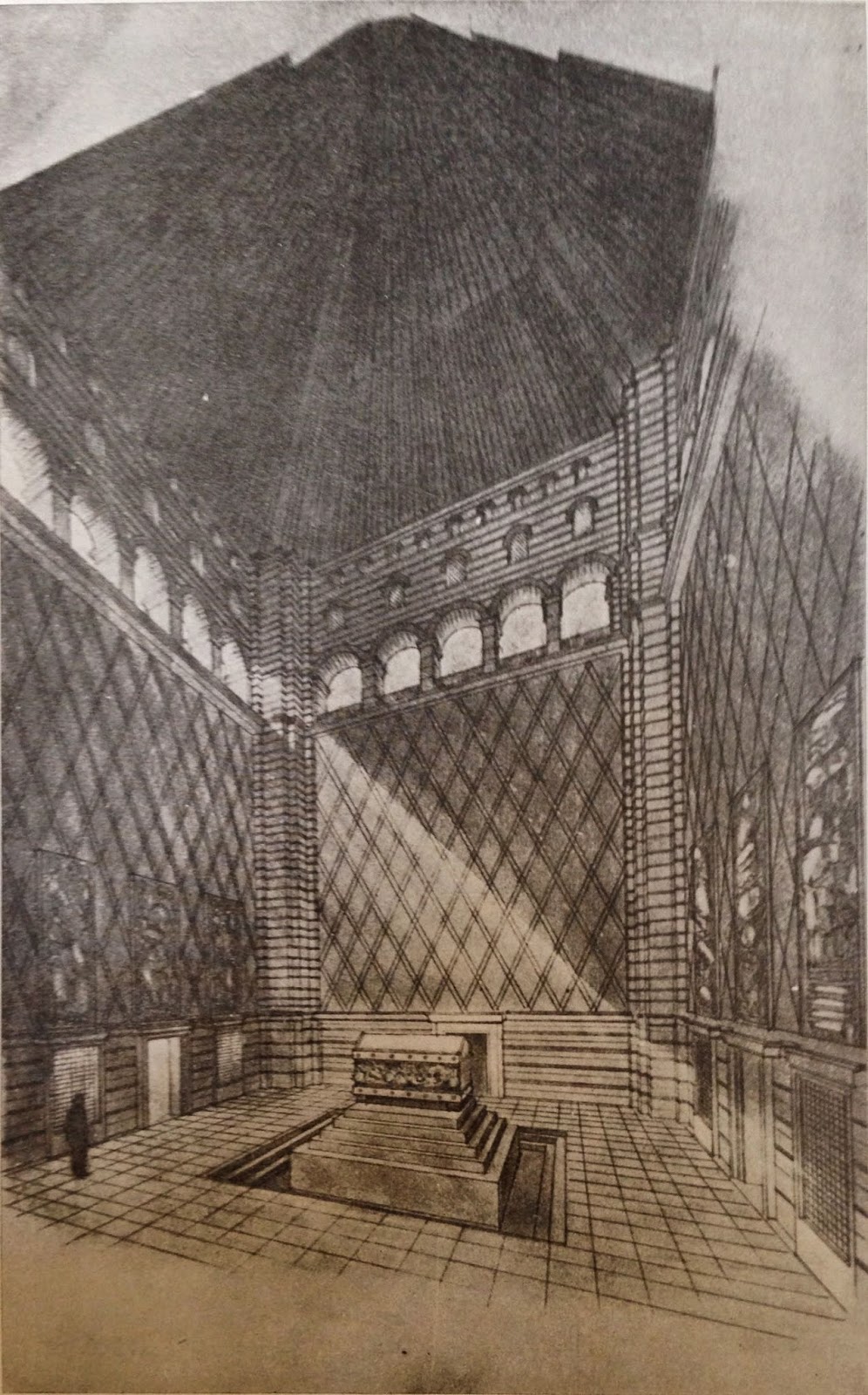 [3] This building is a collaboration by three young Turkish architects, H. Kemalî Söylemezoğlu, Kemal Ahmet Aru and Recal Akçay. The combination of European and Islamic monumental traditions was a favorite of the editors of Arkitekt, who praised it by saying, “We think this project is the closest work to the character of Turkish architecture in the competition.” They went on to criticize the exterior’s relative plainness, and somewhat incorrect proportions, but praised the interior, which “...has an effect on our national feelings. Although it comprises a small tomb, together with the designs on the ceiling and side walls and colonnades, it creates a national atmosphere." 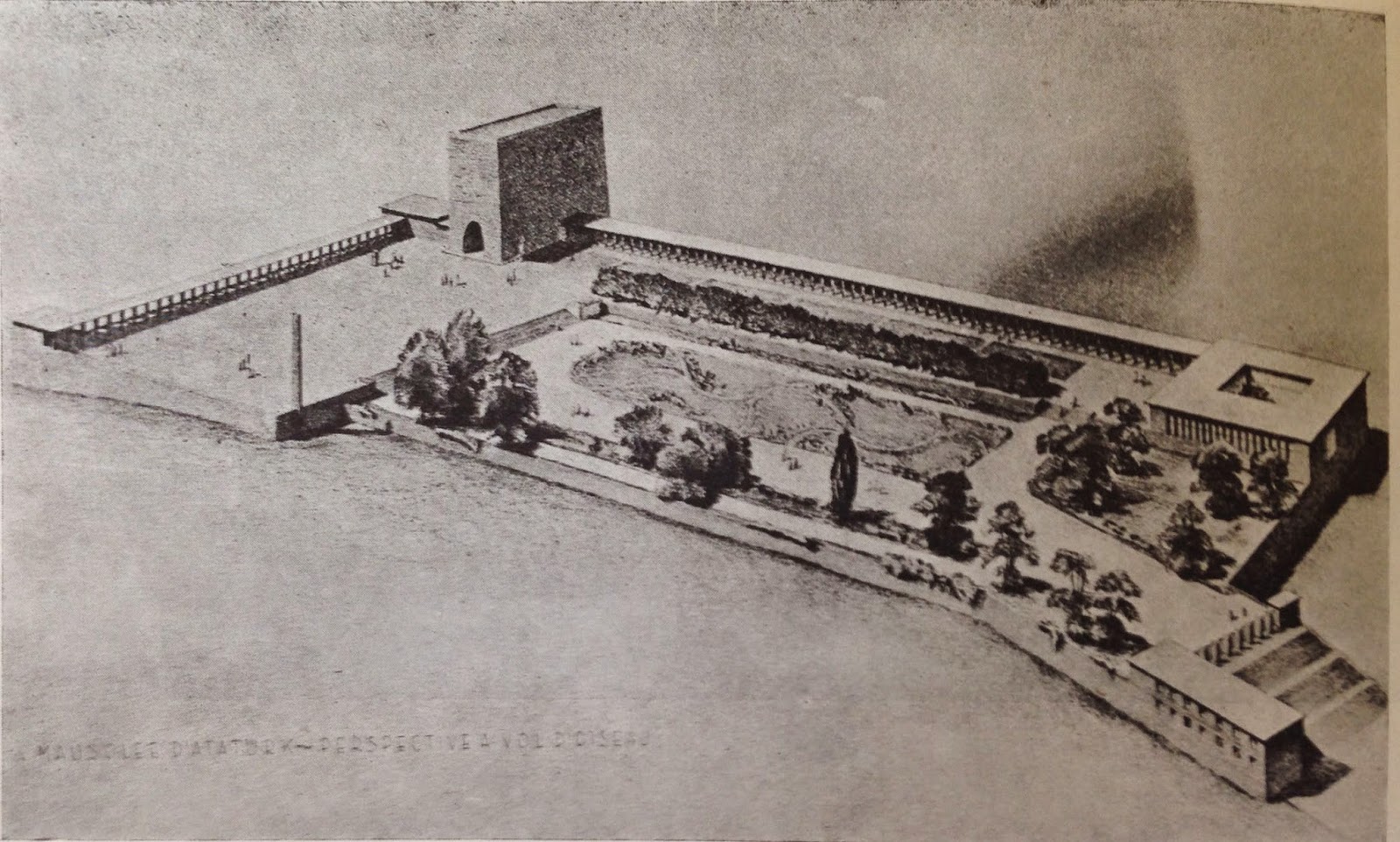 [4] The next entry comes from a Swiss architect named Ronald Rohn, and was, according toWilson, meant to evoke the ancient Egyptian funerary complexes at Deir el-Bahari, located on the west bank of the Nile near Luxor. Arkitekt, in agreement with the competition committee, was somewhat dismissive of this entry (Arkitekt even fails to mention Rohn’s name), citing the lack of monumentality, and overall “humbleness” of the design. 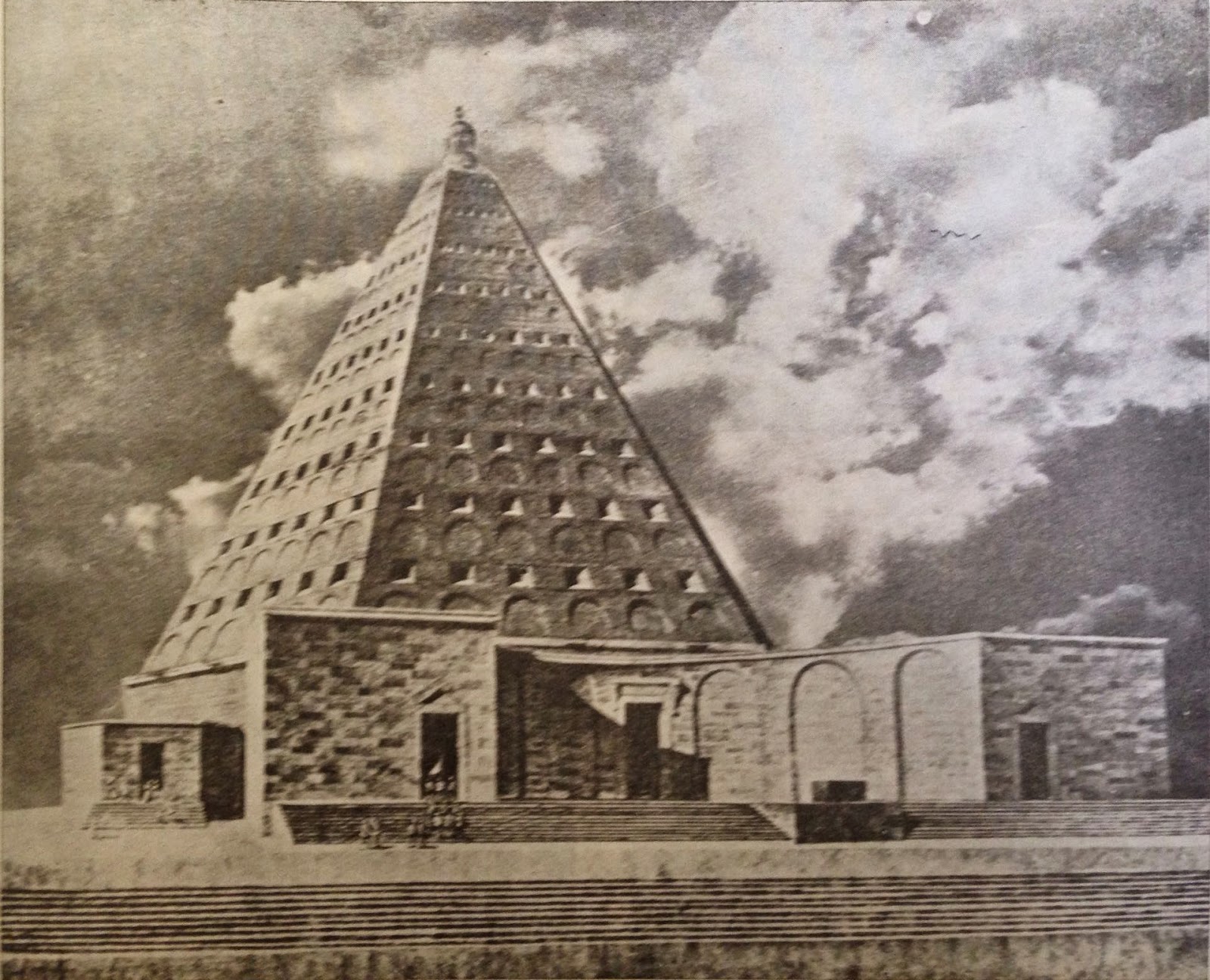 [5] Another design from a European, this time the Italian architect Giovanni Muzio, again evokes the monumental architecture of ancient Egypt. Arkitekt enjoyed the way this entry called back to ancient styles of tombs and graves, but thought that the plethora of windows, coupled with the all-concrete hexagonal pyramid could result in a very difficult system of construction. 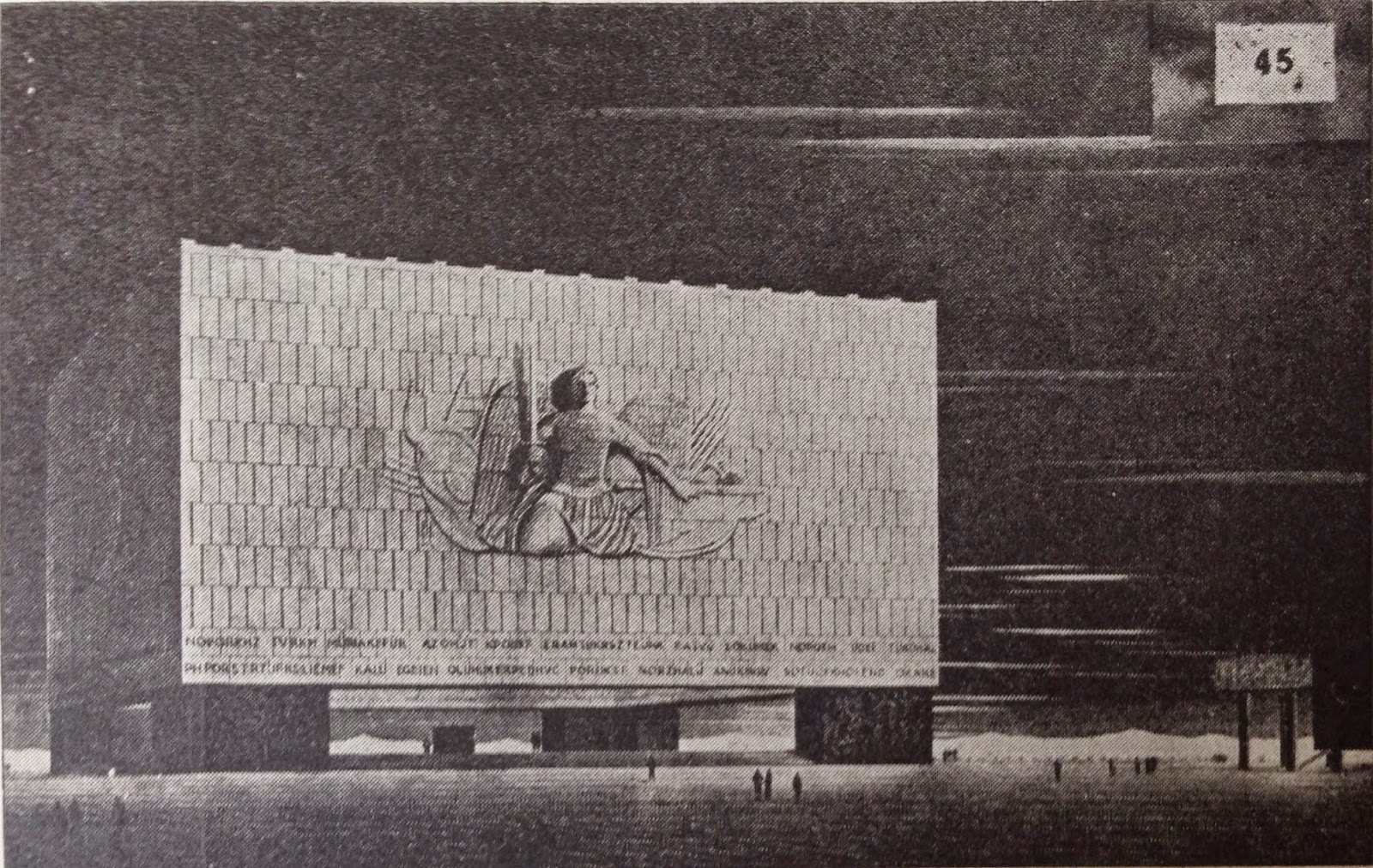 [6] This entry, also from Italy, comes by way of the architect pair Giuseppe Vaccaro and Gino Franzin. It’s a personal favorite of mine, since the design presents a very bold mid-century modernist outlook and might not have been out of place memorializing any of the prominent authoritarian leaders of that period. Vaccaro himself had just designed a smaller funerary chapel for an industrialist family in Bologna (La Capella Goldoni), which also evoked an oversized sarcophagus. It didn’t impress Arkitekt, however, who’s one-sentence description expressed utter dissatisfaction: “We do not really care for the severity of this project’s classical influence, rather decorative internal design and needlessly difficult construction plan.”

[7] This entry was submitted by noted Turkish architect Sedat Hakkı Eldem, and is a nod to Anatolian and Persian traditions of kümbet mausoleum architecture with its vaulted dome that is meant to remind one of Seljukid tents. Eldem, according to Wilson, was one of the pioneers of the canonical “Second National Style” in Turkish architecture that represented an attempt to reconcile historical, local, modernist and national forms in a single coherent whole. Arkitekt’s editors were clearly on board with this style, citing that Eldem’s efforts were “...completely Turkish in their influence and inspiration.” 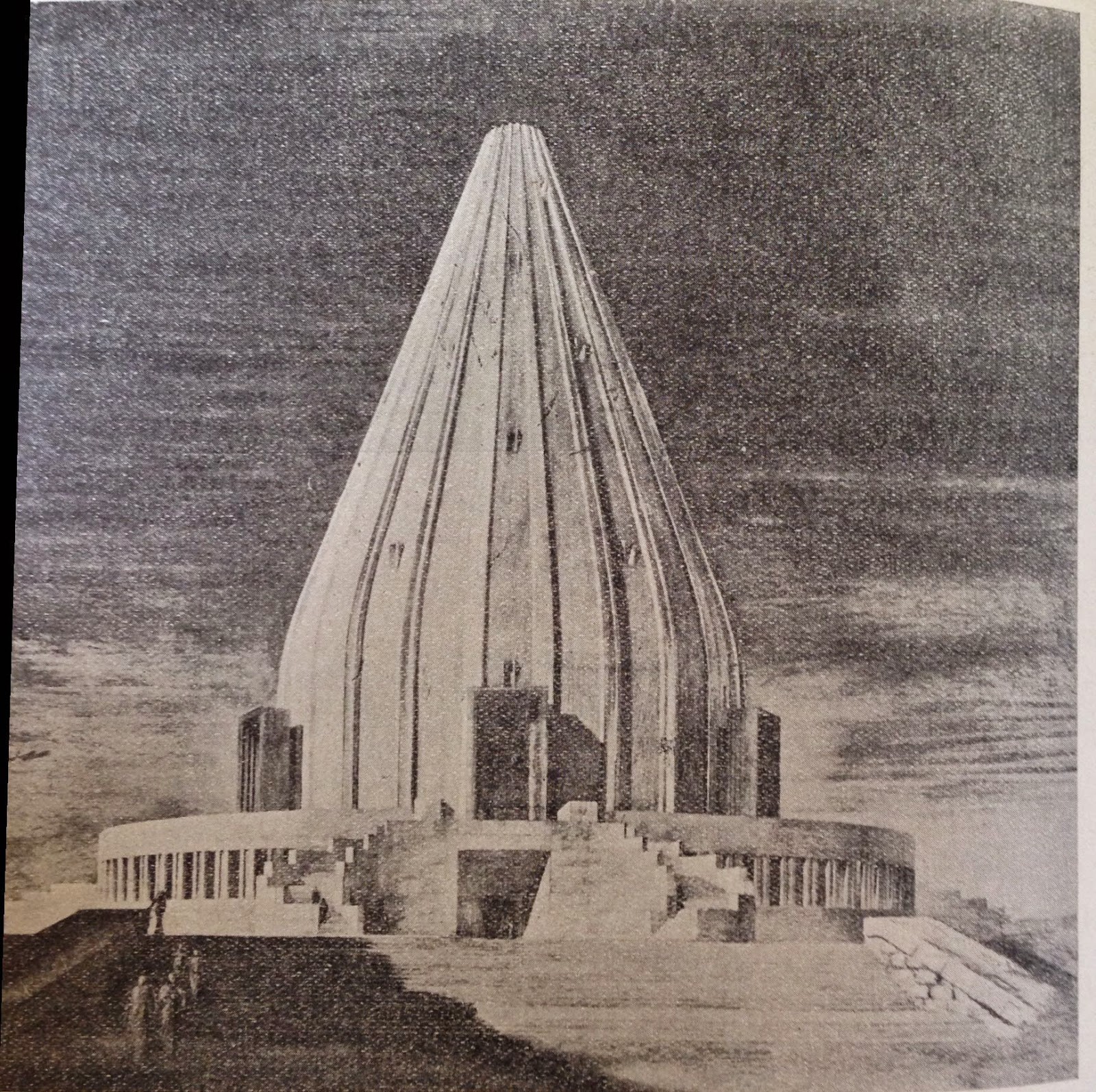 [8] This entry is courtesy of the German architect Clemens Holzmeister, who designed several government buildings in Ankara, including the current Parliament building. The proposed conical pyramid, surprisingly, differs drastically from the more cubic style of Holzmeister’s other buildings, through which he had endeared himself to many in the Turkish government, including the competition committee. The editors of Arkitekt, however, took him to task, asserting that “it is impossible to discern where the external architectural details and descriptions of a monumentality can be found and it does not follow any of the principles of classical works. This personality has been shown to be at work in Holzmeister’s other works.” 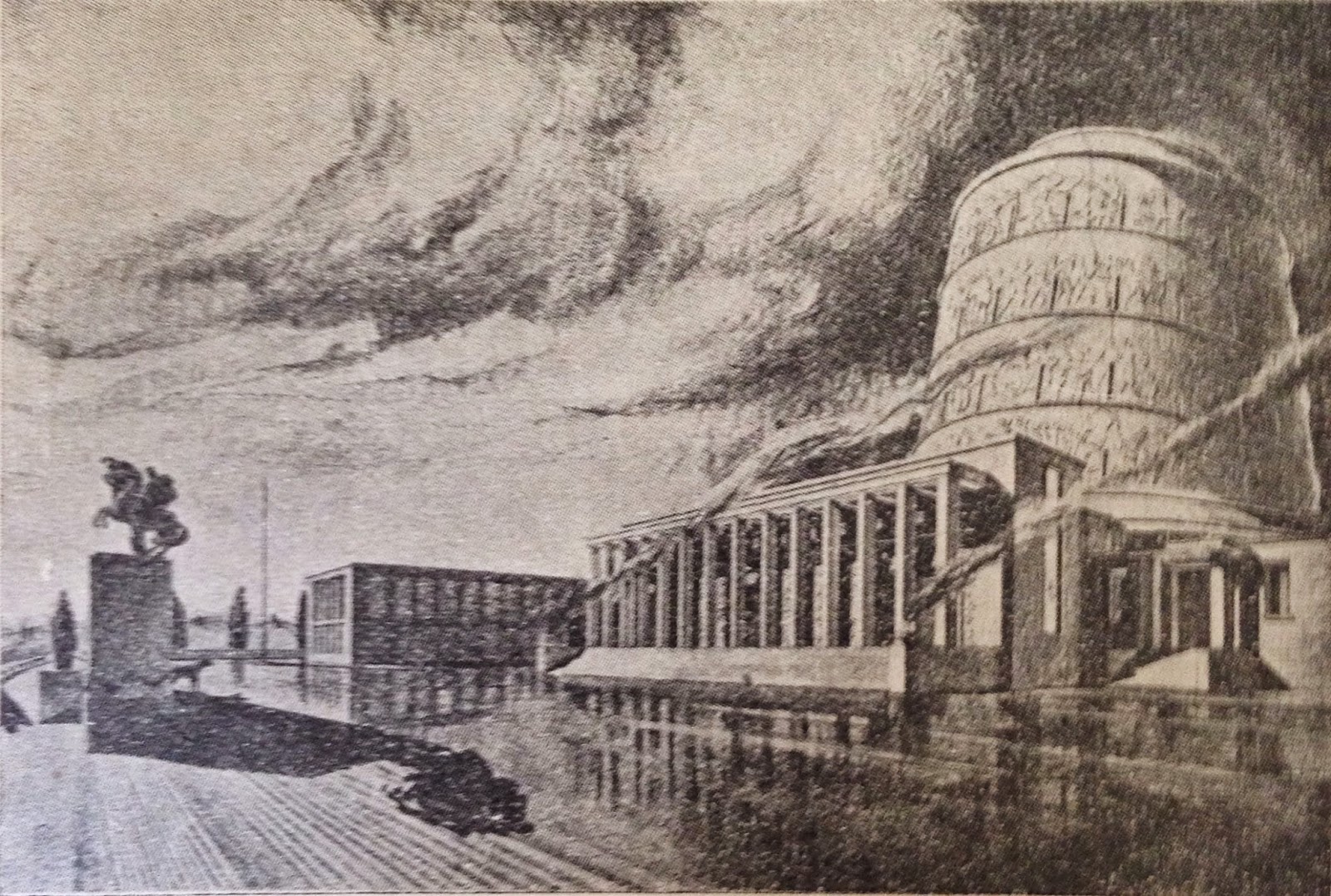 [9] Finally we have an proposal that is perhaps the most palatial, evoking both classical monuments and ancient monuments such as the Tower of Babel or Trajan’s Column. It comes from Italian architect Paolo Vietti, who had previously designed Ankara’s Hippodrome and Istanbul’s İnönü Stadium (home to the football club Beşiktaş). Both Arkitekt and the competition committee dismissed this effort because of the awkward mix of styles, and overall lack of clarity.


I. The Character of the Monument

1. Atatürk established the new Turkey in the heart of the greater Turkish nation. On October 11, 1938, on the face of Atatürk’s coffin, who shook off his mortal coil and migrated into eternity, the greatest influence and gratitude of the Turkish nation was wrought. To express the greatness and power of the connection of the Turkish heart, in which lives this great man, his works and possessions, a Great Monument will be erected according to these principles.

2. The monument will be a place of pilgrimage. This pilgrimage will commence through a large hall of honor and many hundreds of thousands of Turks will be able to repeatedly pass in front of their ATA, while paying their respects, bowing, and feeling their compensation and connection with him.

3. This monument is ATA’s; Soldier Mustafa Kemal, State President Gazi M. Kemal, great politician and scientist, great thinker, and finally a constructive and creative genius, it’s qualifications will be the epitome of power and ability. And we will find the monument to be commensurate with his personality.

4. It is necessary that Anıt Kabir’s façade be visible from a great distance. Accordingly it should be provided with a powerful silhouette. At the same time, although it is necessary that the monument’s architectural motifs be visible from afar, we do not want the greatness and power displayed through small details to be lost in favor of the larger elements. The monument must give the impression of being the most dominant in the land.

5. The Turkish Nation is symbolized by Atatürk’s name and personality. Those who want to pay reverence to the Turkish nation by bowing in front of his catafalque should be allowed to do so. Accordingly, it will be the duty of every visitor to Ankara to go directly to Atatürk’s grave.

6. For the cost of Anıt Kabir’s service and outbuildings, as well as the arrangement of gardens and parks, their maintenance, internal paths, surrounding walls, three million lira will be allocated, of which two million is intended for the construction of Anıt Kabir.  .......

III. The Hall of Honor

15. The place of Atatürk’s coffin constitutes the spirit of this hall. However, the place which the catafalque will occupy is left up to the competition.

16. Aside from this, the six principles accorded to the Republican People’s Party by Atatürk which are the program and symbol of the contemporary, modern Turkey and are represented by the six arrows of the party’s flag consists of these:

It is necessary that competitors display and represent these six principles in the vicinity of Atatürk’s sarcophagus either on its side or in some appropriately visible area.

17. Other that these, there should be an accessible, golden book for our dignitaries and distinguished foreign guests who are paying their respects to sign. The space for this book and the signing space is to be determined by the competitors. [This book, the Anıtkabir Özel Defterleri (1953-1999), has now been published in a 23-volume set!]

JAMES RYAN is a Ph.D. candidate in the History department at the University of Pennsylvania, focusing on the late Ottoman Empire and the Turkish Republic.