Losing the House of Nazife Hanım

About two weeks ago in Thessaloniki, a group of extreme nationalists firebombed an old Ottoman mansion, emblematic of the town’s heyday as one of the great fin-de-siècle port-cities on the Mediterranean. [Fig. 1] Before the attack, the arsonists had been attending a massive demonstration that took up a long stretch of the city's downtown waterfront. [Fig. 2] The protest had been organized in response to the latest round of negotiations aimed at solving the “Macedonian naming dispute”—long forgotten by the rest of the world but still exciting great passions in this part of the world. As speaker after speaker warned the Greek government against handing over the name Macedonia to the “Skopjans” (i.e. the people whom the rest of the world calls Macedonians), a group of suspected neo-nazis broke off from the crowd and set the mansion, located just a few blocks away, on fire. 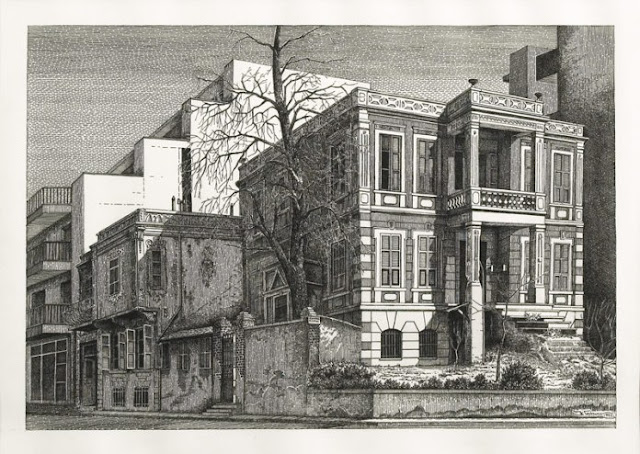 [3] Historic view of the Nazife Hanım House, "Mansion at Stratou 19, on the corner of Sarantaporou Street," by Kostas Gounaris, Undated. Image from Parallaxi Magazine.

A prime example of the eclecticist style that prevailed in Thessaloniki at the time, the mansion was built in 1906 in what was still Ottoman Selânik for Nazife Hanım, the wife of prosecutor Mehmed Şükrü Bey. [Fig. 3] Nazife had been born in 1873. With her three marriages and her personal background (she was born out of a mixed marriage, her mother having converted to Islam from Judaism), Nazife embodied the modern and cosmopolitan world of fın-de-siécle Thessaloniki, and she bore witness to the dramatic events that radically transformed the city and the region in the first half of the 20th century. 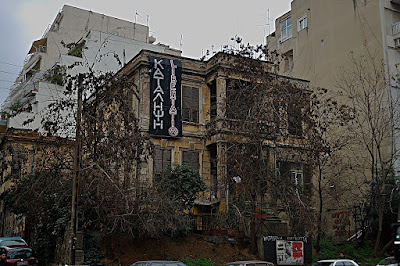 [4] The House of Nazife Hanım under

the occupation of the anarchist collective

After the collapse of Ottoman rule in the Balkans and the division of the region of Macedonia between Bulgaria, Serbia, and Greece, Thessaloniki ended up within the borders of the latter. Thessaloniki’s once vibrant Muslim community was deported to Turkey in 1924 as part of the population exchange between the two countries. Nazife had become a Serbian subject thanks to her third husband, so she escaped that fate, but she remained alone in a city that was leaving her quickly behind. To support herself, she divided her house into separate rooms and rented them out to Jewish families, many left homeless by the city’s great fire of 1917, and the Christian refugees from Anatolia. She died in 1941, and, in the absence of legal heirs, the house passed to public ownership. Two years later, its Jewish tenants, Nazife’s maternal relatives, and almost the entire Jewish population of the city, 45,000 persons in total, were sent to the death camps of Auschwitz and Birkenau. Less than 2,000 survivors returned to Thessaloniki after the end of the war. Nazife Hanım’s house lay empty and gradually turned to ruin. It was declared listed as a historical monument, but was never renovated. In the last few years, the anarchist collective named “Libertatia” set up a squat inside the mansion and performed some basic restoration works. [Fig. 4]


It is doubtful that the nationalist arsonist of January 14 knew the history of the building they set on fire, and even if they had known, they probably would not have cared much. Their understanding of the history of the region begins with the greatness of ancient Macedon and Alexander the Great, stops at Byzantium and Orthodox Christianity, and, with a five-hundred-year leap over Ottoman rule (the “Tourkokratia”), ends with the restitution of Macedonia to the Greek nation in 1912. Greek Macedonian nationalism was shaped during the first half of the twentieth century, a period of violent competition between Greece and her neighbors for the fate of Macedonia. A long process of nation-building followed the end of WWI, with the settlement in the area of hundreds of thousands of Greek refugees, their homelands in Anatolia and the Black Sea lost. This in turn caused friction with the local Slavic speaking inhabitants (regardless of whether the considered themselves Greeks or ethnic Macedonians). The rise of the antifascist resistance against the German occupation threatened political arrangements in Macedonia, but the sidelining of the resistance and its eventual military defeat in the Greek Civil War (1947-49) made nationalism the only acceptable discourse in the region. Its development occurred in parallel, and helped conceal, some very specific practices: The appropriation of the properties of Jewish Holocaust victims and Slavic Macedonians “encouraged” to immigrate in the 1930s and deported after the end of the Civil War, the reinvestment of this capital into mainly the construction sector, and the subsequent transformation of the region’s urban centers through the destruction of much of their late Ottoman urban fabric—a fate the house of Nazife Hanım escaped, as it was public property. 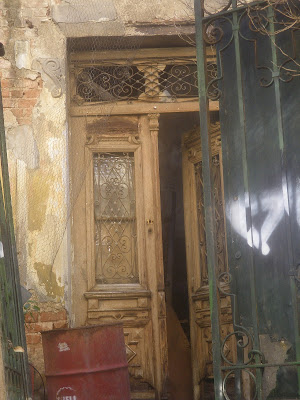 [5] Side door at the House of Nazife

Hanım. Photo by the author.


Greek Macedonian nationalism got a second wind in 1991-1992, when Socialist Yugoslavia dissolved, and the former Socialist Federal Republic of Macedonia became independent. Against the backdrop of the Yugoslav Civil War, Greeks saw nationalism and intransigence against their neighbors as means to forge a secure place for their country in a rapidly changing international environment. As the consensus moved sharply to the right and hundreds of thousands demonstrated that “Macedonia is Greek,” a political and academic fringe sought to undermine this nationalist discourse. Architects and archaeologists sought to save the last remnants of Ottoman architectural heritage in Greek Macedonia from demolition and hand them back to the public. [Fig. 5] Historians expanded their scope to incorporate the stories of the region’s Others—the Jews that made up more than half of Thessaloniki’s population until the arrival of the Anatolian refugees, the five hundred years of Ottoman rule over the region and its surviving architectural and cultural heritage, and the Muslim and Macedonian Slav communities in the hinterland—that had been hitherto censored. Anarchist groups took over old Ottoman houses like Nazife Hanım’s, set up solidarity kitchens for migrants and collectively read Benedict Anderson’s Imagined Communities.

As the nationalist wave of the early 1990s lost its steam, a younger generation of historians both in Greece and abroad continued the project of exploring histories that had before been erased or silenced. In the case of Thessaloniki, no one proved more influential than Mark Mazower and his book Salonica, City of Ghosts, published in 2004 and translated into Greek two years later. The volume helped expand awareness of the impact of Ottoman rule in the region beyond the academic and professional milieus to the wider public. The image of a cosmopolitan city conjured by Mazower, of a commercial center of global significance and renown, resonated with the readers in a city increasingly hit by deindustrialization and investor flight to the Balkans. Thessaloniki adopted its own sense of imperial nostalgia, and the appreciation of a past once inaccessible to Thessaloniki became mainstream.

Yannis Boutaris, a winemaker with roots in the Greek Macedonian town of Naoussa, took it upon himself to express that mentality change in local politics. He was elected mayor of Thessaloniki in 2010 by offering a new direction for the city through the adoption of a more open and inclusive approach to its history. For Boutaris, the reacquaintance of Thessaloniki with its rich Ottoman and cosmopolitan legacy, and an honest discussion about the erasure and destruction of much of that legacy in the years following the city’s annexation by Greece (including the assumption of responsibility for the inaction of the local authorities and institutions, and the Christian majority of the city in the dark days of the Holocaust) was first and foremost a moral obligation. It also made good business sense, by allowing for the accumulation of cultural capital and putting it on the map of prospective tourist and investment destinations. Taking a page out of Richard Florida’s playbook, Boutaris sought to transplant the creative cities model in the post-Ottoman urban environment. Only, in this case, the city didn’t build bike lanes but opened old mosques to visitors. And the “creative classes” courted here turned out to be Turkish and Israeli heritage tourists. That approach seemed to have been working, with the increase in tourism shielding Thessaloniki from the worse parts of the ongoing economic crisis, and the city’s liberal stance discouraging the eruptions of racist violence experienced in Athens and elsewhere.

Even before recent events, however, the limits of liberal cosmopolitanism had been clear. Accommodating for the historical presence of Jews and Muslims in the city did not necessarily extend to the multicultural realities of the contemporary city and its migrant communities from the Balkans, Africa, the Middle East and South Asia. A proposal to rename a local square in honor of the Albanian sister-city of Durres proved controversial, and the plans of Thessaloniki and neighboring municipalities to rehouse Syrian refugees met with stiff resistance. The large scale of the recent demonstration on Thessaloniki’s waterfront and the brazen arson of an architectural monument in the city showed the ongoing appeal of Greek Macedonian nationalism. Boutaris himself seems aware of the threats to the model of inclusive historicity that he has pursued. In a speech he made this past week commemorating the Day of Remembrance for the Holocaust, he concluded thus:


Many ask us why the belated interest in the history and the memory of the Salonican Jews? The desecration of the Holocaust memorial and the arson attack on the house of a Jewish and Muslim Salonican should have been enough as an answer. 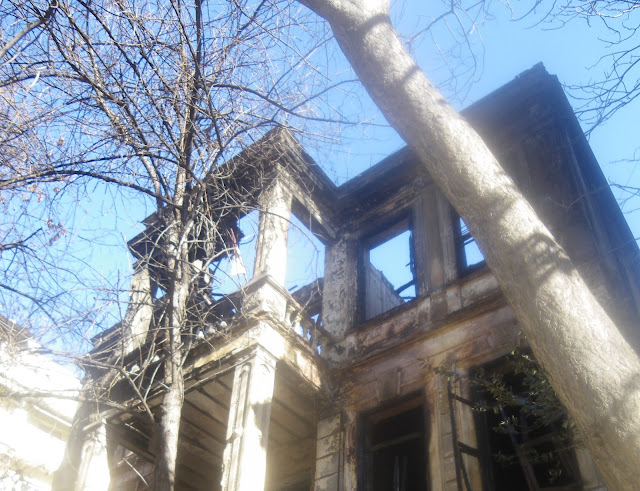 [6] Upper stories of the House of Nazife Hanım, showing the damage after the fire on January 14, 2018. Photo by the author.

The fire that ravaged the house of Nazife Hanım destroyed its roof and floors, but thankfully left its stone walls largely unscathed. [Fig. 6] Restoration is both possible and urgently needed. Until then, its burnt shell will stand as a reminder of the precarity of the building of cosmopolitan politics in the urban fabric in our times.

***The Greek version of this essay will be published in the Sunday edition of the newspaper Avgi, February 11, 2018.


Sotirios Dimitriadis is a lecturer at Temple University.